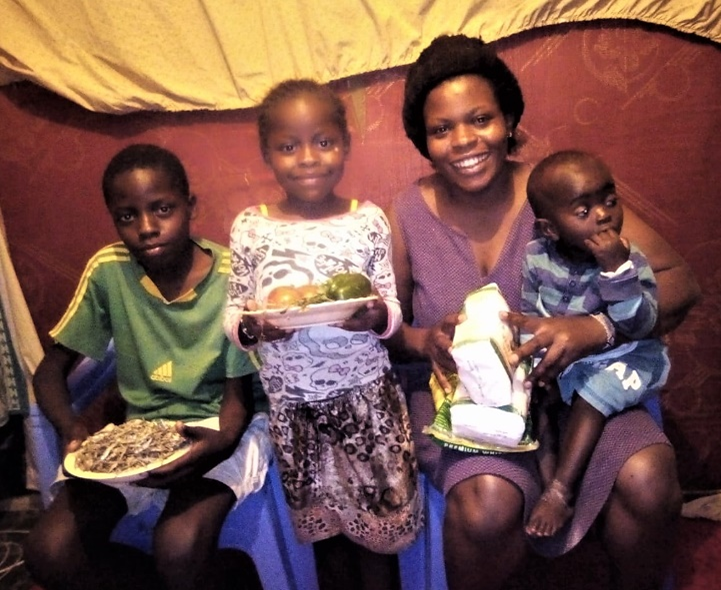 As the Covid lockdown has eased, we have continued our food assistance to the 100 families, but at a reduced level. We are now giving $3 to each family every two weeks. This provides enough money for the family to buy approximately 3 kilos of maize meal or other foods of their choice. The families continue to send back photos showing the food they have bought: http://100fams.org

The families obviously have some other small sources of income now in order to pay school fees and the rent for their dwellings. We are working to determine whether it would be possible to lower the allotment for food so that this money could be used for other services that would provide a means for families to become more self-sufficient. As you will see below, we have already implemented some systems to help the families do this. 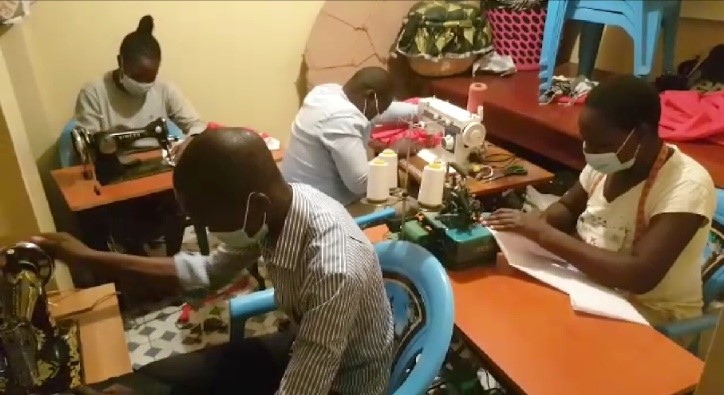 In August of this year, we surveyed the families asking how else our project could be of assistance to them. One woman asked for a sewing machine for her business of tailoring used clothing for resale. This gave us the idea of providing a common workspace with multiple sewing machines that all of the families could use.

We currently have this workshop set up in Samuel’s school, with four sewing machines and one serger. The machines are being used continuously and sewing classes are also being conducted. A number of mothers have used the machines along with the cloth we supply to make school uniforms for their children; without these, the children are not allowed to attend school. 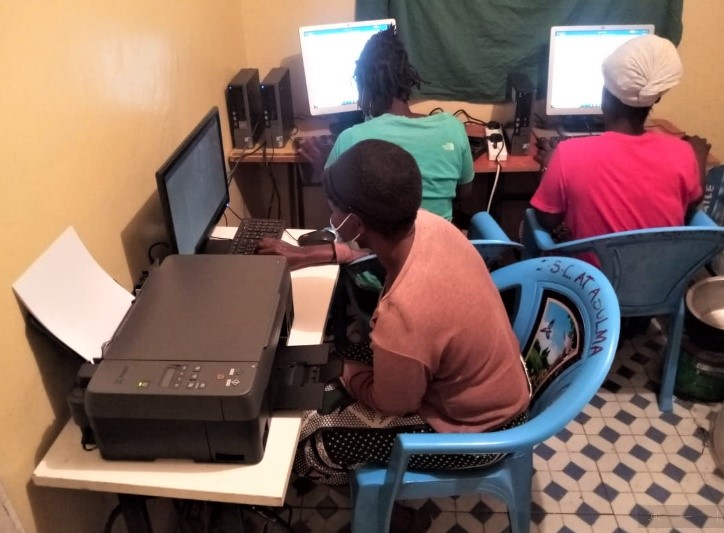 After setting up the sewing workshop, we decided that it would also be desirable to provide a number of computers for the families’ use. To this end, we purchased three desktop computers along with one multifunction printer. All of these machines are connected to the Internet and are receiving active use.

Samuel states: “The three computers and the printer have been of immense help to members. They can access Internet, Google, download and print their children’s assignments. They too can photocopy, print, and even scan their documents.  For those who need basic computer knowledge, we train on basic commands and typing.” 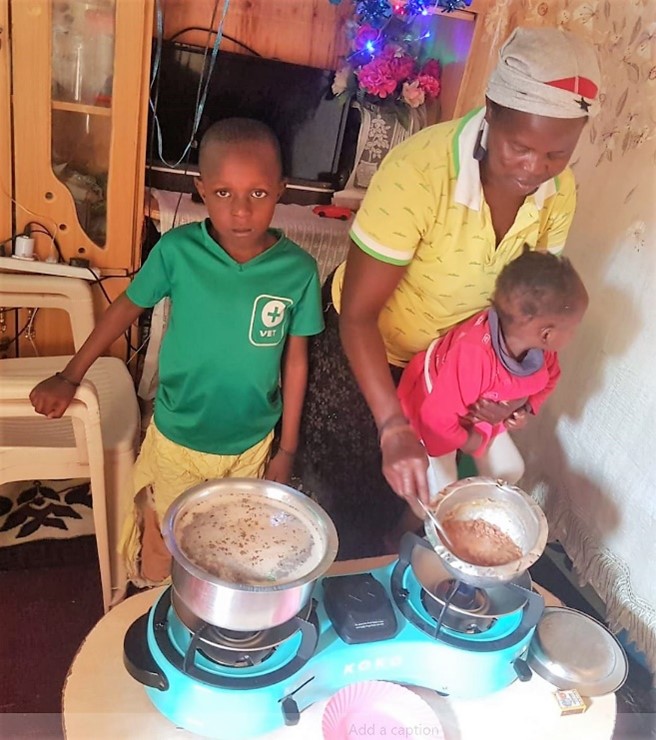 The two-burner ethanol Koko Stove is now available in Nairobi. So far, approximately 200,000 such stoves have been sold there. The manufacturer has made use of the dynamics that have powered the rise of cellphone use in the developing world. The stoves sell for approximately $18, a price which includes two 1-liter containers full of ethanol fuel. “Koko Point” machines are available throughout the slums where people can use their cell phones to buy as little as 50 Shillings worth of ethanol at a time. This is a big advantage since users of LPG stoves need 1200 Shillings to refill their tanks.

The company claims that each of their stoves annually generates up to USD 30.00 in carbon credits that are being purchased by Korean companies. The money provided by these credits is used to keep the cost of ethanol low for Koko Stove users.

We have conducted a trial introduction of these stoves to seven of the families. So far, the reception has been very positive. We are now working to fund the purchase of 100 stoves to distribute among the 100 families. This will free up some LPG stoves that we had previously donated to some of these families. The extra LPG stoves will be redistributed to the families that we have helped to open street restaurant businesses where multiple cookers will allow them to cook more easily for their customers. See more photos of the families using their new Koko Stoves here.

Koko Stoves were featured on the BBC podcast People Fixing the World: https://www.bbc.co.uk/programmes/w3ct1pl4 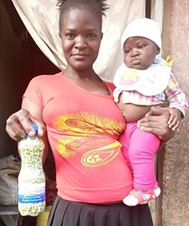 The families continue to sprout mung beans to save cooking fuel and to provide another source of vitamin-rich food for their families. We estimate that 50 families are now sprouting regularly.

We did an informal survey and determined that nearly 50% of the thermoses we provided a year ago to each of the families have now been broken. Apparently, living in such a small space with so many children, it is very common for the thermoses to be dropped, and since the interior of the thermoses is made of glass, they break easily.

We are looking into whether to replace the broken thermoses with thermoses that have metal interiors, or to somehow find another way that thermoses can be kept intact, perhaps by hanging them on the wall.

It happens occasionally that one of the family members becomes ill or is injured in some way. In such cases, where the family cannot afford medical treatment, we have provided small amounts of money to allow for this. For example, two different toddlers have fallen into family cooking fires. We were able to pay for their tests and medications after they were admitted to the hospital. Both have since recovered but who knows what would have happened if they had not had the money we provided so they could afford care. We also paid for transportation to and from radiation treatment appointments for one cancer patient. She has now been declared free of cancer. 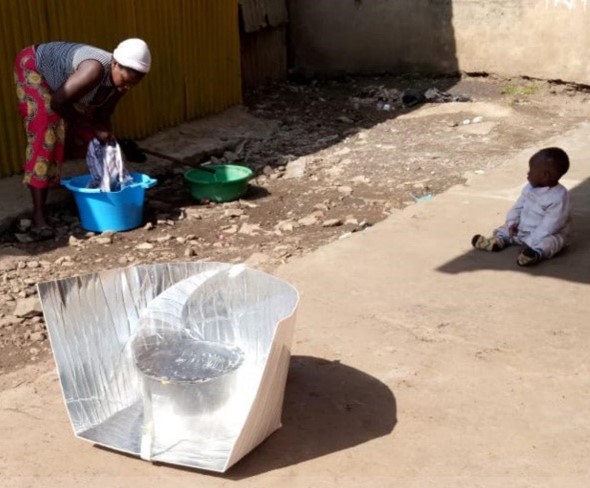 We have trained 55 families in the use of solar cookers. Currently, eleven of the families have their own solar cookers and use them regularly whenever the weather permits. This reduces the money these families spend of fuel and allows them to use this money for other needs. 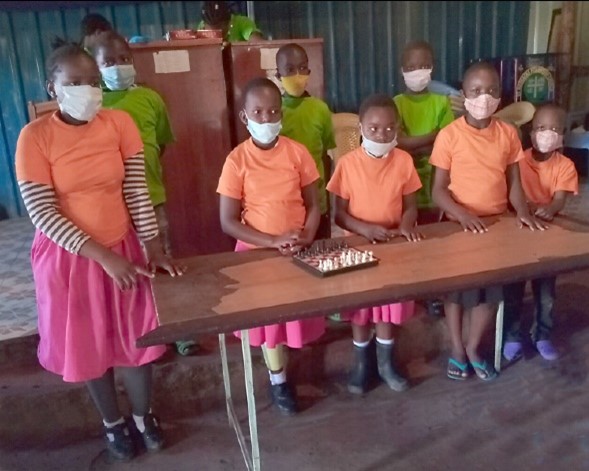 The Chess Club has grown to 43 members with 17 girls and 26 boys. We have provided six chess boards for their use and made each member aware of an Android app that provides dozens of instructional videos. So far, we have held two chess tournaments. Periodic tournaments will continue.

Families who wish to participate in the Borrowing Fund each deposit 100 Kenyan Shillings (approximately $1) per month into the fund. As long as this monthly deposit is made, the family has the right to borrow money from the fund at 10% interest per month. This gives the families a ready source of money for emergencies. Loans must be paid back completely in the month following the issuance of the loan. At any time, a family can withdraw all of the money that it has deposited and stop participating in the fund.

Each family is urged to keep the area around its dwelling free from litter to act as a good example for neighbors. Also, on the day of the food money transfer every two weeks 25-30 family members show up for a large community cleanup where litter is collected, and sewage channels are unclogged. 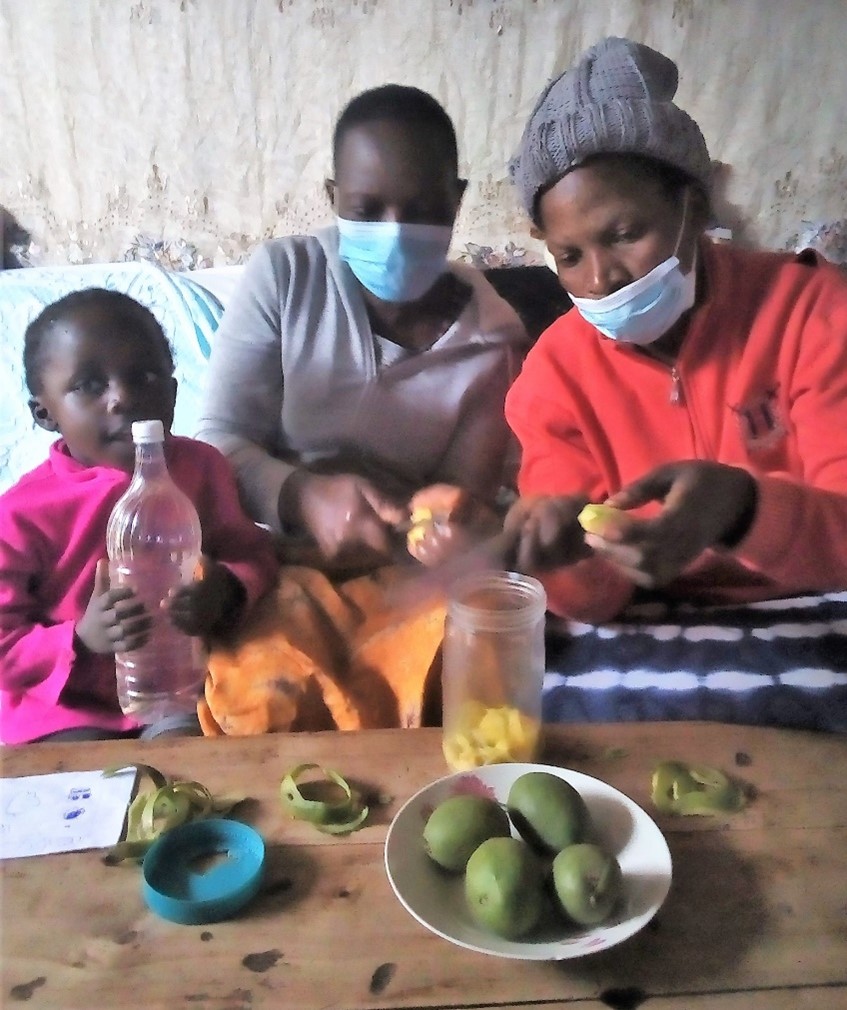 Approximately 10% of the families have adopted the practice of fruit fermentation. Since mangos are very cheap once a year, for example, these can be bought very cheap. It is very easy to cut these into jars that are then sealed and allowed to ferment. In this state, they will stay fresh for months.

Donating to the Project