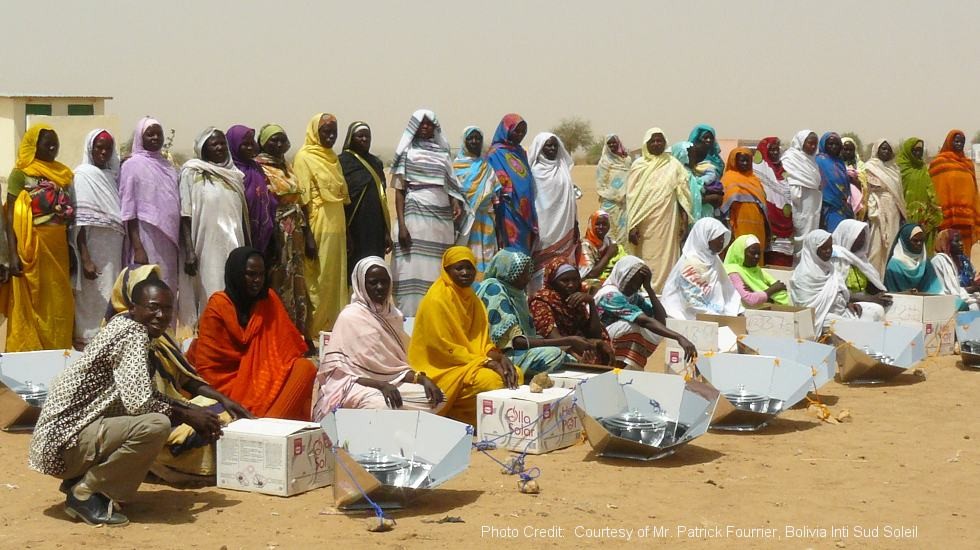 Darfur refugee camps set up in Chad along the Sudanese border in arid areas east of Abeche have exerted tremendous unsustainable pressure on the land and forests of the region since 2003. The greatest source of this degradation has been the relentless pursuit of firewood required for cooking.

50-HotPot pilot project in Gaga refugee camp, Chad
In 2011, the United Nations High Commissioner for Refugees (UNHCR) contracted with Solar Household Energy (SHE) to conduct a “Promotion of Renewable Energy & Energy Efficiencies in Farchana Region in Chad” pilot project introducing five-liter HotPot solar cookers to 50 families in the Gaga refugee camp. SHE developed the HotPot in 2002 and has introduced it in many countries around the world, including in Africa.

To implement the project, SHE engaged Mr. Patrick Fourrier of Bolivia Inti-Sud Soleil (BISS) of France to go on two missions to the Gaga camp in order to establish the project and carry out an assessment. Mr. Fourrier worked with Africare, a US non-profit already active in Gaga camp and UNHCR’s implementation partner for environmental projects there, to distribute the solar cookers, provide training and follow-up, conduct interviews with recipients, and collect monitoring and evaluation data, at baseline and again two months after distribution.

Africare expands pilot project with 200 additional HotPots
In July 2012, based on the pilot project’s success, Africare delivered 200 additional HotPots to refugee families. With the support of UNHCR, and funding from the COMO Foundation (Singapore) and the Dorothy Ann Foundation (USA), SHE hired Mr. Patrick Fourrier to work with Africare on several objectives: to assess HotPot usage and fuel use impact, to propose a standard monitoring and evaluation methodology for future solar cooker projects, to assess the adequacy of alternative solar cookers, including the three-liter HotPot, and to assess the feasibility of Gold Standard carbon certification for potential upscaling of the project. Africare’s report stated that 85% of households use the HotPot, and 50% of households were preparing a meal in the HotPot when the surveys were taken. Average firewood savings were estimated at 16 kg per family per week, or over 64 kg per month. The technical performance of the 3-liter HotPot was found to be comparable to that of the 5-liter HotPot. In discussions, women expressed their wish to own two complete HotPot sets to be able to simultaneously cook the main dish (e.g. rice) and sauce.

The Lutheran World Federation (LWF) confirms HotPot’s success
LWF became UNHCR’s new environmental partner in 2013, replacing Africare. LWF highlighted the HotPot’s continued success. A LWF 2014 survey showed that 40% of HotPot recipients no longer used their 3-stone fires, 87% were satisfied with the HotPot, 76% desired another HotPot, 47% noted positive health impacts, and 62% used the HotPot with high frequency compared to other cookstoves. 45% of HotPots were in excellent condition with good maintenance, and 55% were in good condition with low maintenance.

SHE 2016 evaluation ascertains HotPot’s long-term usage
Mr. Patrick Fourrier carried out a mission to assess HotPot condition and usage after 5 years and test out a more affordable alternative, the “Haines” solar cooker. Evaluation results of the HotPot were still very promising at all levels, with no known breakages of the 250 HotPots. For instance more refugee women expressed the desire to own a HotPot because they recognized the value of the absence of smoke and the economy of wood consumption. Additionally, the Haines solar cooker showed strong performance in boiling water, prompting SHE to conduct more extensive field tests in collaboration with ADES, an environmental and development NGO based in N’djamena.

The future of SHE’s solar cooking project in Chad
SHE is currently looking for funding to scale up the solar cooking project in the Gaga refugee camp. The new project would introduce an additional 1,000 solar cookers in the Gaga refugee camp, enough to cover 30% of the refugees in the camp. The groundwork for a proposal expanding the project has already been carried out. SHE’s consultant Patrick Fourrier, LWF and UNHCR staff have collaborated to develop a draft proposal, budget, action plan, and terms of reference to recruit future solar cooking ambassadors and field managers.

SALWA MAHAMAT SOULEYMAN: “I learned that with the sun I can cook all my dishes, without having to exit the camp. All women should have a solar cooker.” KALTOUMA ABDALLAH ISMAIL: “We don’t have enough wood, the solar cooker will help us use less wood.”