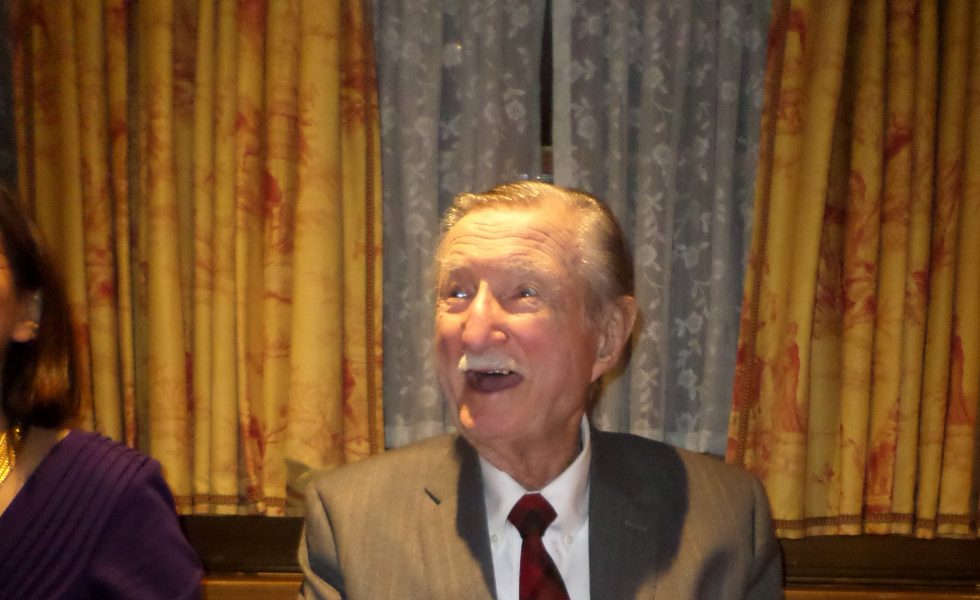 We are deeply saddened to pass on the news that Darwin O’Ryan Curtis, a co-founder of Solar Household Energy and leading figure in the solar cooking movement, died on Nov. 5 at age 94. His commitment to solar cooking endured until the end of his life, and the fruits of his tireless efforts live on. Dar Curtis (center, rear) at the World Bank when SHE won a “Development Marketplace” award in 2003. Others in the photo: Christine Danton, Louise Meyer, Lorenzo Rosenzweig, Richard Stolz Dar served in the U.S. Merchant Marine during World War II, and after college, in the foreign service until 1983. During the following years he explored other ways he might contribute to society.

Using the insights he gained from living in Asia and Africa, Dar became an advocate for solar cooking as a way to address the problems associated with the use of firewood for cooking in much of the developing world. He was an early volunteer for Solar Cookers International (SCI), and in 2013 received SCI’s “Order of Excellence” award.

In 1991, Dar published a watershed global analysis of solar cooking’s potential. In 1998, with Louise Meyer and the late Dr. Barbara Knudson, Dar co-founded Solar Household Energy, Inc. (SHE), “to unleash the potential of solar cooking to improve social, economic and environmental conditions in sun-rich areas around the world.” Louise remains an active member of SHE’s Board of Directors.

The vision of Dar and SHE’s other founders was to harness the motivation of small entrepreneurs to drive the dissemination of solar cooking technology, in addition to working with NGOs in targeted areas. “Whatever works,” he would often say.

Another phrase Dar also often used to convey his acceptance of different ways of accomplishing the same goal: “One doesn’t exclude the other.”

When launching SHE, a sustained effort was required to persuade the IRS that equipping entrepreneurs in developing countries for solar cooking technology dissemination was a mission worthy of non-profit charity status for a U.S. corporation. Dar Curtis at his celebration dinner for his retirement from the SHE Board. He remained active as a SHE advisor and supporter until his death.

Dar wasn’t just an advocate. Working from his designs, engineers at the Florida Solar Energy Center developed a durable panel solar cooker that could be made and distributed for $27. It was named the HotPot. By 2004, Curtis located a Mexican company to manufacture them, in collaboration with the Mexican Fund for the Preservation of Nature. Several thousand units have been distributed since then.

While duly proud of that product, Dar encouraged and welcomed innovations in solar cooking technology, including the Haines Solar Cooker, that followed in the footsteps of the HotPot.

Dar never learned the meaning of the word “retirement” in its traditional form. He remained an active supporter of SHE and like-minded organizations until his death. He will be sorely missed.

Highlights of tributes from fellow solar cooking advocates and include the following: (Follow this link to read more or add your own.)

Dar was meticulous and well- prepared when it came to SHE business, but always upbeat and fun. He lived what he preached and knew how to brighten the lives of others. I am most fortunate to have worked with Dar for over 20 years. He was my mentor and became a dear friend. Everything I do is part of his legacy.
– Louise Meyer, co-founder, SHE Inc.

The world has lost a giant of a man. Around 1990 Dar met two Solar Cookers International (SCI) founders, the Shimealls, as neighbors in Borrego Springs, and contacted SCI. Thus began countless emails between us and phone conversations for three decades with Dar, brainstorming strategies to spread solar cookers wider, faster. For SCI’s 1992 1st International Conference at a California university Dar’s paper was accepted and presented by his son, John. SCI owes much to SHE’s research, advocacy and marketing including the HotPot and admires work led by three key solar pioneers – Dar, Louise Meyer and Barbara Knudson.
– Bev Blum, SCI co-founder and former Director

When I first met Dar, he conveyed a motivating vision for the success of SHE. Later, I read Dar’s memoire which reinforced my sense of his genuine interest in others, inquisitive mind and passion for good works. At SHE we strive to carry forward the vision, mission and the positive work culture that Dar established and exemplified. Those of us who had the privilege of knowing and working with Dar remain inspired by his legacy.
– David Grossman, President, SHE Inc. Board of Directors

Promoting solar cooking technology was and continues to be an uphill battle against powerful forces, but Dar was never willing to give up the fight. Dar was a mentor, an inspiration and a delightful host. He kept us all moving forward through some very challenging times.
– Pat McArdle, past Board member of SHE and SCI.

Dar was an inspiration to us all. He was a true gentleman, a kind, gentle spirit, with a delightful sense of humor. He ignited my passion for solar cooking, and I am still inspired by his vision to this day in my work for Solar Household Energy. He was an influential figure in my life, a wonderful mentor and friend. It is an honor to continue his solar cooking legacy.
– Sophie Lyman Brock, Executive Director, SHE Inc.

Dar was a tireless advocate for solar cooking, and a kind soul. I remember fondly his impressive collection of solar cookers at his home, and his desire to welcome anyone to discuss solar cooking and share solar cooked food. The world certainly needs more people like Dar.
– Caitlyn Hughes, Executive Director, SCI.

He was a pillar of the solar cooking community and will be fondly remembered for his wisdom, experience, humor, and gentle spirit.
– Afzal Syed

Dar’s vision, patience, generosity, and optimistic tenacity throughout our many overlapping years with SHE was/has been an inspiration to me.
– Richard Stolz, Board member, SHE Inc.

I became a member of SHE’s board of directors in 2010. Dar showed me his large collection of solar cookers as well as a huge set of files and correspondence. Even in retirement, Dar was clearly a hard worker, and he inspired me to devote the past ten years of my retirement to this organization. I am grateful for his leadership, and for all the wonderful humanitarians he introduced to me. He leaves a legacy that continues to inspire many others around the world.
– Paul Arveson, Board member, SHE Inc.