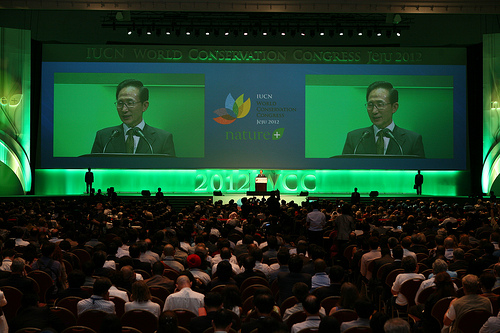 The International Union for the Conservation of Nature (IUCN) has embraced a strong resolution sponsored by Solar Household Energy calling for increased support for solar cooking efforts worldwide. The measure was adopted in September at IUCN’s quadrennial World Conservation Congress in Jeju, South Korea.

IUCN, founded in 1948, is the world’s first global environmental organization with over 1,200 member organizations, including 200 governments, as well as some 11,000 volunteer scientists and experts operating from 160 countries. Members must be nominated by current members, and satisfy strict selection criteria before joining the organization.

SHE is a member of the respected organization, and was represented at the Congress by SHE Board members Dorothy Zbicz and Scott Hajost, who previously served as Director of IUCN’s Washington, DC office. IUCN’s backing of the resolution adds significant authority to organizations and individuals that have been working towards the acceptance of solar cooking as an essential and viable environmentally beneficial technology.

Among other actions, the resolution calls on its members and other entities to:

The resolution was co-sponsored by five other IUCN members: Grupo Jaragua (an environmental organization based in the Dominican Republic which maintains a strategic partnership with SHE), The Natural Resources Defense Council, the Center for Environmental Legal Studies, Earth Day Network and the InterEnvironment Institute.